We have been late for school a lot lately. A lot. So we've been trying a new strategy at My Only Girl's suggestion. Upon informing me that everyone (of course), in her class gets to watch tv in the morning before school, she predicts that they will all get up earlier if they were allowed to watch tv.
My poor children. Generally the tv doesn't go on during the week, though there are occasional days when they do watch some. Am I mean?
Anyway, we came up with a plan. They get dressed, right down to their shoes before crossing the threshold of the sitting room, and sort out breakfast too.
The result?
We have been on time everyday this week so far.
And I suddenly find I have time to pause in the morning, as I love to, but haven't had time to for...oh, a long time. And I found the golden hour again.

Look what I glimpsed out the front window! 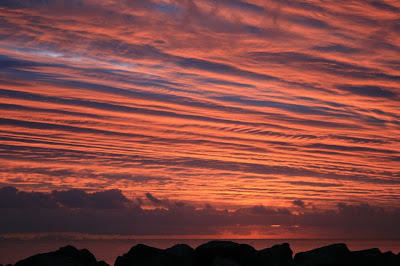 Unfortunately because our house is lower than the railway line we can't actually see the sea, but the sky said it all. So out I went with my camera, and thanks to Irish Rail and their nonsense, instead of pottering over to the beach like we used to, there I was, at sunrise, perched up atop a makeshift ladder, all to see the wonder of this glory.
It was worth it.

This next picture was taken ten minutes later. 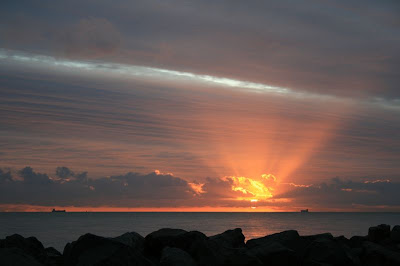 And ten minutes later again it was all gone.

So, considering the fact that the children chose to watch a wildlife program, and I got to see the sunrise, aaand we got to school on time, I think I am converted to our new regime. I'll let you know if the novelty wears off...
Posted by Ciara Brehony at 10:46

Email ThisBlogThis!Share to TwitterShare to FacebookShare to Pinterest
Labels: fun, kids, out and about

Those photos are amazing Ciara. Good to know the new regime is working.

Fantastic Ciara, whatever works! my boys have to leave our house by 8.15 am and it is some achievement every school day!

I concur - lovely photos.
Isn't it funny how much children know about one another's home rules and family life? My boys insist that NOBODY else's parents ever make them do any chores...
And no, you are not mean! My children don't get to watch tv during the week either. Although I have given in to occasional computer time (and I have to fight to limit it).
Best of luck!!

Hilarious! I hate TV, especially the ads but people are different in many different ways. And maybe the children know something we don't. Perhaps you should read, "Everything Bad is Good for You." http://www.amazon.co.uk/Everything-Bad-Good-You-Popular/dp/0141018682/ref=sr_1_1?ie=UTF8&s=books&qid=1229039081&sr=1-1

Here's a sunrise, ain't that enough?
The pictures tell it all. Beautiful.
And about TV... my kids only get to watch some children DVD during the week if it's rainy ourside and they "deserve it". Cartoons on weekends. However, I understand that you have twice my problems to sort things in the morning and make sure you make it to school. And at this point I think whatever you do will be fine... You are a huge family!

as you may be aware I LOVE TV! Its entertaining, its educational... whats bad about it? Ads are a pain but we just fast forward them now with the dvr!
My own mother never let us watch tv and now I am a telly addict! I even watch shortland street...
Forbidden fruit and all that!

You should get a TV in the Kitchen and watch it during dinner. Ugh.

wow...... yo live in such a magical place, so good to be able to enjoy it, the little moments are important

i miss my visits x

wow...... yo live in such a magical place, so good to be able to enjoy it, the little moments are important

i miss my visits x

Oh. Those pictures look like heaven itself. It's enough to convert one to become an early riser.

And no, I do not think you are mean for disallowing television during the week. Personally, I think imagination thrives best without it!!

Happy weekend to you!

I think you have the lowest child to tv ratio known to modern humankind! I wonder if they would get up early if they were allowed to listen to RTE in the morning? But the important thing is that you get to see the sunrise!

Gorgeous photos, btw! I love that you get on a ladder to watch it, and share it with the rest of us. You live in a beautiful part of the world. Really. I hope your experiment continues to go well!

Really nice to see these shots...