Well, our Halloween this year was a strange one.

I won't say it was a non-event, but it went from being an entrenched tradition to... well, let's say a scattering and a smattering.

Every year, for as long as we've had children, we've spent Halloween at my parents. And they have the house brilliantly spooky, and the kids find money in their dinner, and a ring in the brack, and they get to knock on the same doors as I did with my brothers and sister and our friends. 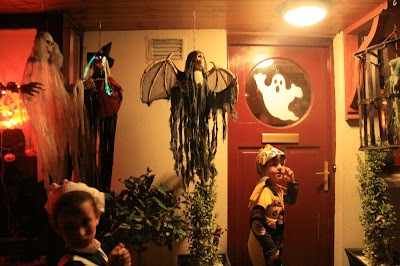 But this year one was invited to a party, another to a sleepover which went pear-shaped and didn't happen.

And the oldest decided he wasn't going on his own, so went to a friend's. 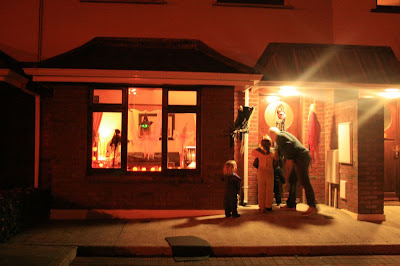 So I was left with a disappointed (read devastated) six-year-old, and a two-year-old who hadn't a clue what was going on but happily went in whatever direction he was pointed in, like a little wind-up bunny! 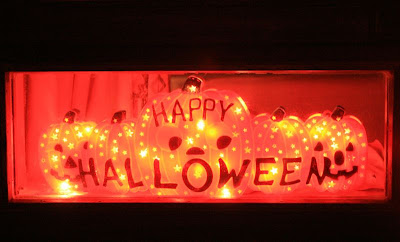 And between everything I mentioned in the last post, and more, we had left it until the last minute to decorate the house, only to find our decorations had been decimated by a wee mouse sometime in the last year... sigh.

I think that's called the icing on the cake?

So, for the first time ever we had no colcannon, no barm brack, no decorations, and no pumpkin! And for anyone that knows me, that is a sorry day indeed. 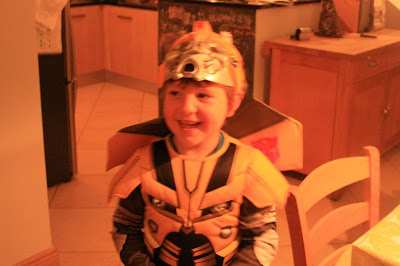 But you know, we have friends. We have great friends, who said 'come on, come to us'. And we did (which is where these photos were taken) and for the first time ever we went trick or treating in our village.

And today they all said 'Next year we are definitely going to Mamo and Grandad's...'

I am glad Halloween was saved. I bet they are all looking forward to next year already. :) Enjoy your November. xx

By the looks of that smile, your friends saved the day! Halloween is so much fun.

We had a bizaar Midterm and Hallow'een of sickness too and miserable kids so disappointed with their energy levels. I took Cal to the Knitting and Stitching Show. Big mistake....K-Doc Sunday, they think he had Swine Flu....Poor boy.

I can only imagine the devastation. Poor little chap! For a child who spends half his life in costume anyway, Hallowe'en must be the one night when the world is totally on his wavelength and making complete sense. And then it threatens to fall through!

But I am glad to hear it worked out in the end. That gleeful face says it all. I hope the others had a fun night too.

Ciara (to sound like the woman I am that was born in the wrong century as husband says...) EVERYTHING happens for a reason dear...who knows what the universe saved you from...and in the end things worked out...as for ourselves...to say we got "wet to the knickers" (its funny now) while we were trick or treating is an understatement ;0) but we wont forget this Halloween...hugs xx

I'm so glad you managed to have a Happy Halloween...

congrats on making it to Blog of note :)

Aww, I hope Mamo and Grandad didn't miss you all to much! :)

By the looks of that smile, your friends saved the day! Halloween is so much fu

congrats on making it to note Blogspot

nice halloween :) .
i always hope in my country, there's an halloween party too T.T

I followed the Blog of Note, too. We've already decided to go to Grandma and Grandpa's next year - it will be a Sunday!

Found you on blogs of note! Hope you all are feeling better; there sure is a lot of stuff going around, isn't there?

I am a grandma (Gramme) of a two year old so I love the fact that your kids want to go to their grandparents next year!!

Hi! Is my first time in here. And I don't speake in english, so I'm sorry.
But I loved your blog =D

Congratulations to you, being Blog of Note today :)

My Bangkok Through My Eyes!
You Got A Posty

I just want to say
CONGRATULATIONS on being Blog of Note

Cheers and best regards from Canada.

I loved your story. They grow up so fast and want to do their own things. It's a good thing I guess but hard for us moms.

I'm from the United States and am very curious as to what these terms you wrote meant. "we had no colcannon, no barm brack"

I can only imagine the devastation. Poor! For a child who spends half his life in costume in any event, Hallow 'must be a night when the world is at your wavelength and to give a complete sense. And then threatens to go!

Traditions are so special, but when things go awry, it's sometimes just as special to discover new adventures! (Hope that mousie got a big tummy ache...)

I am gobsmacked by this! Thank you all so much for your wonderful, sweet comments. I am honored to be accolade.
Thank you Blogger!
Nothing like the spotlight to make you polish off what's been a teensy bit neglected lately! So I have my blogger hat on at a jaunty angle, and my socks pulled up.

MilkmoonMama is back on full time duty!

When I first started to read this I wondered if everything would turn out for the best, and it seems like it did! I went through Halloween this year without carving a pumpkin and roasting the seeds (my roommate and I did have a pumpkin, though). Also, I was Posh Spice for this year's Halloween, but the rest of the Spice Girls (couple of my friends) decided to do their own thing and split up. When I was little, Halloween was always a tradition to have at my home and everyone in the family got dressed up. We haven't done that for a while, but as long as I'm surrounded by friends and family on Halloween, I'm good to go.

I enjoyed your blog, Ciara.

I am very impressed with your blog, I am also a big fan of Ireland. Thanks for the inspiration to further improve my own blog.

Congrats on achieving Blog to Note!

Well done on Blogs of Note!
Enjoyed the Halloween post and the pictures ... good friends are worth their weight in gold!

What a lovely family you have. I'm new to all this and you came up as a blog to read. Love your style of writing. Looking fwd to reading more!

Waw that's wonderful, we don't make that in France :(

Good day Milkmoon, Yes halloween is always a fun time. My girls were always so excited about it even now that they're grown. I guess it's apart of growing up we all never really forget. Glad yours was a good one.
Be well...Enjoy the day. Sherrie :)
Creator of: THe Babytree
http://thebabytree.net

Secrets to increase your money from google adsense
http://www.eslammoney.blogspot.com

Hey! you have a really nice blog! love it! I'm gonna follow you! ^^

What a beautiful blog! I love your writings and your pictures. So glad to have found you as a featured blog. Congrats!

Congrats on being named Blog of Note! :)

Congrats on being a Blog of Note! I am really enjoying "catching up" on your blog! :-)

Hey :) Love your writing , I'm glad everything went fine during halloween =D I'll be always passing by here. Hope you see my blog too^^ I startet it today ^^ xoxo, brooke

I am so glad Halloween was saved and I hope next year works out great!

Lovely name Ciara and a lovely blog.
Glad your halloween was rescued by your friends.
Concannon and barm brack sound very good to me.
Being a blog of note gives new people like me a chance to get to know your blog.
I plan to visit often and hope to get a glimpse of beautiful Ireland.
Hope you enjoy being a blog of note.
Have a good day tomorrow.
Love,
Herrad

nice blog i like your blog and keep writting

your blog is so cute i love it!!

Sometimes I feel so old--I've seen far too many family traditions come and go throughout my own childhood. I'm going to make it a point to emphasize the importance of traditions with my own children : )

Sounds completely different to the Hallowe'en we had: I spent most of the night rugby tackling wee ones who'd managed to make it through the barbed-wire and anti-personnel mines I sprinkled liberally around the perimeter-fence.

Mind you, they still ran rings round me - cost us a fortune in tricks and treats! :)

visit my blog for info on hottest issue nowadays..:)
just for fun.

I loved reading about your Halloween in Ireland. My daughter and I, having just a smidge of Irish ancestry, are all about things Irish. I wanted to tackle barm brack this year but the ingredients weren't readily available. I didn't know that colcannon was a tradition, is that just with your family or much of the country?