I found a gun under the couch. It's a homemade job. When questioned, a little guy called Edmund admitted to owning it, and told me that he really wanted one and Jay helped him make it on Sunday while I was at the Knitting and Stitching show. (Hmm...) He said he wouldn't kill anyone with it.
Twenty minutes later he brought it to me and showed me that 'Actually, (his favourite word these days), it's looks much better as a dog', and it now sports everything a dog needs to be a dog. Gives new meaning to the word 'gundog'! And so much friendlier too.
Oh how I love the creative process! 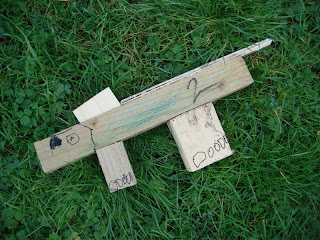 Aww thats so sweet, my little girls favorite word is 'actually' too! I love it.. she always sounds so earnest when she starts (or ends!) a sentence with it! I love your blog. Its full of Motherhood joy! Being a Mummy too, my heart always swells when I hear your stories of your fab kids! Arent kids amazing.. they bring so much fun and laughter to every day!:)

Nothing compares to that particular joy they bring! Even the trials and tribulations are worth it!