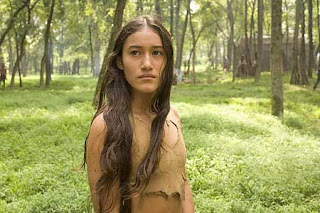 I just have to do a little post about the Terrence Malick film The New World. Myself and the older two watched it for the second time last night. If you haven't seen it, I recommend you do. Oh, it's like a beautiful dream. All those shots of hands, of sunlight through trees, grasses blowing in the wind, the wordless looks, the music that rolls like a river throughout, and then silence with just the wind in the grass, running water, birds in the air. It's sublime. I could watch it endlessly.
Sigh.
It's also a beautiful example of how film doesn't have to rely so completely on words. I do love a good script, often it makes a great film great. But it's so restful to watch a film that relys on the visual to a greater extent.
And it's a beautiful love story too. That's always good, isn't it?

See something beautiful from it here
Posted by Ciara Brehony at 18:58

Email ThisBlogThis!Share to TwitterShare to FacebookShare to Pinterest
Labels: movies