A Short Study Of Ru.

One night recently, a school night, about an hour after lights went out, we heard a very familiar creaking floorboard outside the sittingroom. The lurker a.k.a. Ru was about. He's the shadowy presence often found creaking that very floorboard after dark. So, this particular night it tuned out that he had been up to tricks. Literally. Instead of turning out his light he had opened his magic set and practised in earnest, and really had to show us his latest trick. He was so delighted with himself, how could we give out? 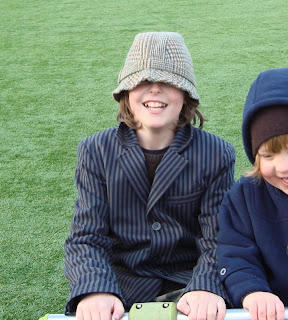 On His Bedside Table At The Moment:

Artemis Fowl. (Not sure which one. I can't keep up)
'Metamorphosis'', Franz Kafka. (Really!)
Marks and Spencers Magic Tricks,
The Essential Calvin and Hobbs.
Action Replay. The Ultimate Cheat System. (For DS Lite)

I can't believe he's nearly twelve. May this next year be very slow! I need to adjust to the idea of having a teenager in the house. Though looking at the list above is very reassuring.

Though I can't tell you who he has a crush on!
Posted by Ciara Brehony at 21:59

Email ThisBlogThis!Share to TwitterShare to FacebookShare to Pinterest
Labels: kids

Oh, Ru will be a great teenager: if anyone knows his own mind, there's a young man who does.

Did he ever read the Alex Rider book?