Who Is Small Family?

Aha. It has been brought to my attention that I did not explain properly the Small Family. They are the first in a series I am making. Basically, it's me, Jay and the kids. We are joind together with poppers, and we will be sent off around the world to all our loved ones who we don't get to see often. I came up with the idea when our dear friends Marta and Sam were heading off to Argentina and I was trying to think of something to give them to take with them. In the end they weren't finished on time and are due to be posted. 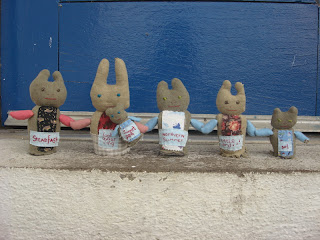 So, the names on them are my interpretation of the essence of each person in our little family. First from the left is Jay a.k.a. 'Steadfast.' The name is fairly self explanatory though there is more to follow on that.
Next is me a.k.a. 'Lookaftering.' Again I don't think I need to explain it! I'm holding Billy, who is 'Sweet Pea". Really he's still figuring out who he is but that name just about sums him up.
Then it's Ru, who is 'Northern Summer'. This is from a line in a Vashti Bunyan song: 'Once I had a child, took his while like northern summer...' This sums him up perfectly, from the day he was born. Really.
Then it's Finn who's known as 'Little Bird'. Need I say more? From the time she was tiny you could always know where she was because you would hear her singing. Thanks to Jay's Mum, a.k.a. Nana Anne.
Then we have Edmund,'Sol'. He is Sunshine. He is.
Posted by Ciara Brehony at 12:34

the photo wouldn't come up on my computer! i'd love to see it - can you mail it to me? lovely idea...

funny that edmund is called "sol" - i always felt a special connection to him and again now as my 'focolare' name is "Sole" which is italian for sunshine...

Lisa made my point for me. The photo link is broken. I love the thoughts behind the figurines. Can they come to visit Sligo, please?

Thanks for that, I thought I'd have to wait til I went home to fix that but there were photo's of them on my 23/11/07 entry.
We'll be in Sligo very soon!

he is THE sunshine or EL SOL x

Have a look at some of these:
http://www.makingtoys.net/