Of Snow And Ice And The Frozen Lands.

I love when something drifts into your ether, and for some reason, on this particular occasion, buries itself deep inside you, and takes hold of your Interest with tenacious hands, and soon you begin to notice all kinds of Things of Interest relating to it positively popping up in front of you.
For months now I have been filling my head and heart with all things of the far, distant North, and farthest South too. Increasingly, as the weeks go by, I have been dwelling, in my mind, in places of ice and water, reading of explorers of a frozen world few of us have seen, watching this drama about Ernest Shackleton, trying unsuccessfully, to see this exhibition about his journey, (although it will be on for two years, so I'm not worried about missing it!), being unexpectedly inspired by a talk I attended by a wonderful geologist-turned-textile-artist called Ann Fleeton, at this months Irish Guild of Embroiderers meeting, gathering books and images and inspiration.


But it all started with the happy coincidence of two things coming my way within days of each other, which settled onto the already lingering taste of two books I had read in the last year. The first book was The Stillpoint, by Amy Sackville, which I have to say is one of the finest written books I have read in many a year. It contains one of the most heartbreakingly romantic love stories, as well as descriptive writing that will make you swoon, and read and reread countless paragraphs again and again.
The other book is less to do with snow and ice, and more to do with the kind of desolate places that some of the characters of The Stillpoint find themselves. The book is by Judith Schalansky, and is called 'Atlas of Remote Islands, Fifty Islands I have not visited and never will.' Incredibly beautiful and thought-provoking, and in fact, winner of the German Arts Foundation prize for The Most Beautiful Book of the Year. It is a book I keep by my bedside and dip into continuously.


So, the two things. First, these incredible photographs by Camille Seaman, which are just majestic and beautiful and completely enthralling to me. (She also photographs clouds like no one I have seen before.)
And then this most wondrous thing that I found via the lovely Nancy, of The b In Subtle, which I now have my heart set on and will go on some day! A ship, The Noorderlicht, a century-old Dutch schooner, which carries a boatload of artists and scientists into waters around Norway's archipelago, who's mission is 'to seek out and foster areas of collaboration to engage in the central issues of our time'. In other words, to 'discuss' global warming and related issues, and to make art about it. The project is called The Arctic Circle , and well worth checking out. As I write this, Irish artist Ruth Le Gear  is there now, collecting arctic water in tiny bottles.
I am...jealous.
I have not stopped thinking about it since first coming across it.
I would give anything to be there right now,  in this magical place who's time is limited, and who's face is changing by the year. To record something of it in my own small way.


In all of this, my light relief has been rereading Philip Pullman's Northern Lights. So today, when I saw it, I could not help but purchase, and immediately immerse myself in, a very beautiful, small book by him called Once Upon Time In The North, a sort of precursor to Northern Lights. It was the small size of it, and the cover, that did it, a cloth-bound thing of beauty that had on it an engraving by John Lawrence. Indeed it is filled with such engravings, beautifully rendered, on almost every page. 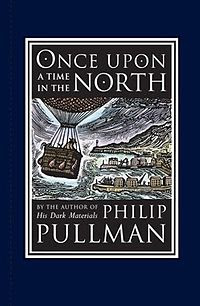 So I sat in the hairdressers for a little over an hour, while the best kind of misty, autumnal rain quietly closed in around this seaside town of ours, a haze of silver and grey outside the window, and lost myself in a grim, desolate icebound island, where sour, suspicious people live alongside panserborne, or polar bears, a once proud, great culture, and now seen as nothing but drunkards, vagrants, who skulk the bleak streets of the dismal town.
When my time was up, I put away my book, and took a winding road up into the rain clouds, between two mountains, surprised at the lack of icebergs in the grey sea below, through the silent silver haze, listening, as I do most days, to music from the north lands, this time Sigur Rós, (Iceland is about as far north as my music taste goes, for I am well and truly stuck there, without hope, or desire, to be unstuck!), my head filled with snow and ice and frozen lands.
When I arrived at school, it was too wet to stand around chatting, so as I waited in my car I opened facebook on my phone, and the first thing I saw was a post from Charlie and Caroline Gladstone, a video called A Homeless Polar Bear in London. I had to take a look.

As I said, I love how these things all just come together like a beautiful dance that is perfectly choreographed, and suddenly your day just seems like a story, or a dream, with all things dovetailing beautifully.
This time a dream of expansive snowy landscapes, vast tundras of ice, blue icebergs and polar bears, and crowds of white sea birds relentlessly thronging the bitter air.

What a wonderful post. I am going to have to go and re-read it and make a note of some books too. Have you read Susan Fletcher?

I have been intrigued by all things Nordic for some time now. Something powerful about a people who live in such a harsh environment and make it beautiful with their clothes and homes and paintings. I only found out this year that through the DNA project that our female line in the family has indeed Finnish genes! I imagine them eons ago landing on your Island all woolen and reindeer skin wrapped! I have also been following the sad plight of our Northern caribou who may become extinct because of their inability to coexist with humans and mining and development. Sad to think that Canadas oldest mammal is threatened.

Oh, Ciara, what a post! Thanks especially for all the book recommendations. I feel like I really need that Schalansky book. And the Noorderlicht--what a dream come true that would be to sail on it. I can't think of more important work than finding creative ways to save the arctic, and I love that artists and scientists are collaborating on this.

That video is amazing as well. Seriously, this post is one I will be telling lots of folks about, including my husband, who teaches a class (and has for many, many years now) at the University of Massachusetts Lowell called Monsters, Apes, and Nightmares: Literary Responses to Science. It's an incredible course (he teaches it online as well to students all over the world), and I know he will be very interested in this post.

You are an inspiration. xo gigi

Thank you, Cait, and no I haven't read her, but you can be sure I'll be heading off now to check her out, thank you! xx

That is fascinating, Kerry, and now of course, I remember you wrote a blog post about this! I don't know about my own genes, but I'm certain I'm mostly Irish, but then I ask myself, what does that mean? The Irish as a race is actually a big pot of Vikings, Celts, and Normans, and that's just for starters! I would love to know. I love that image you painted there, of them landing here all those years ago! I'm sure there must be some northern blood in me!
Regarding the caribou, how awful, and how sad, I didn't realise that was the case. I cannot help thinking how similar looking they are to the now extinct Irish Elk, which I lament every time I take my dearlings in to the Natural History Museum in Dublin. It's the first thing you see upon entering the building. So incredible to think about, I hope your caribou has a happier ending. :-(

This manifestation of things coinsiding together is astonishing and beautiful to witness. It seems like a reassuring gift, yet I wonder if it happens with more frequency if we are paying attention.

Thank you for this!

They live in the arctic and write about their ordinary, creative lives in a - for us - not so ordinary environment.

Ramona, thank you so much for those sweet words, and I agree completely, I'm sure it happens every day, just out of the corner of our eye, if we pause to look up!

Dorit, thank you, I'll be of now to take a look!

Half-heard in the Stillness said...

The video is very moving. Even though the polar bear is the most vicious animal known to man (I can't help thinking back to that young man who lost his life when on a youth trip, when the bear alarm failed)we must preserve our world any way we can.
A very thoughtful and moving post Ciara.