I thought I would share something a little bit different with you here this evening.
I used to have another blog that I shared with a friend, a blog that fell by the wayside quite some time ago, but one that had some lovely things on it. So I have decided over the next few months to share some seasonal posts from it with you here. I hope you like them.

But first, a little about the blog:
"We are two mothers who want our children to know what childhood was like. Before Nintendos, before computers. Before fear of freedom. What it was like for us, and for our mothers, and their mothers. We want them to know adventure, to know play, to know the world. And not the controlled, organised world that modern mothers seem to think they are tied to, but the real, natural world that is here on our doorstep. Come and join us on an adventure in childhood."

This first post is one that I expect will resonate with some of you. And I would dearly love to hear similar tales of what sort of games you played as a child!

~*~
Autumn has come around again, and it's time for 'Conkers'! This is a game that has been around for generations and is very simple and satisfying to play.
First of all, unless you are lucky enough to have a horse-chestnut tree in your garden, a walk in the woodlands is essential. So on a crisp morning off we go hunting in the woods. 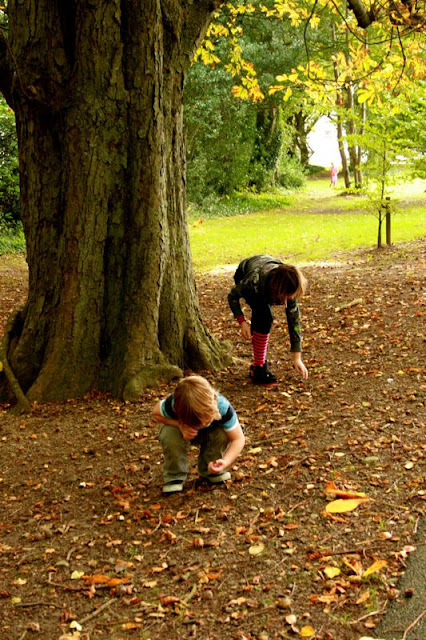 You'll often find the biggest and best chestnuts are the ones still in the shells. 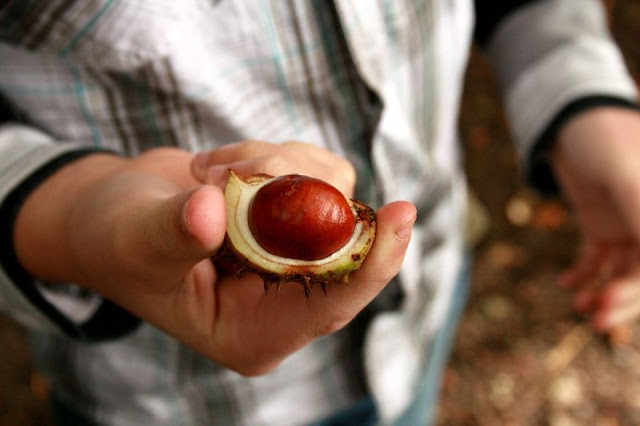 If you do find one, standing on it is usually enough to open it and you can peel it back to uncover the shiny treasure inside. 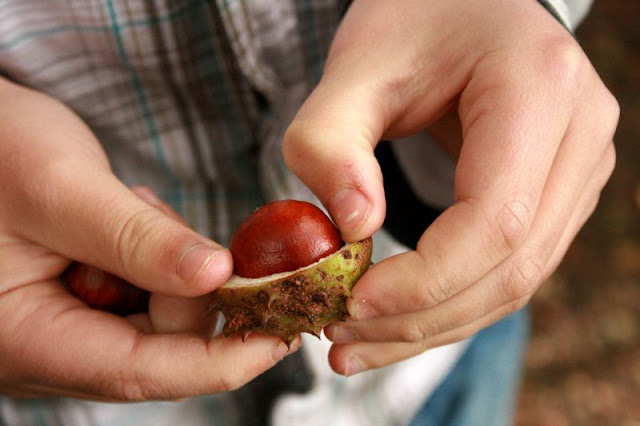 We usually fill a bag or basket as there are lots of other things you can do with them, as we will show you later. 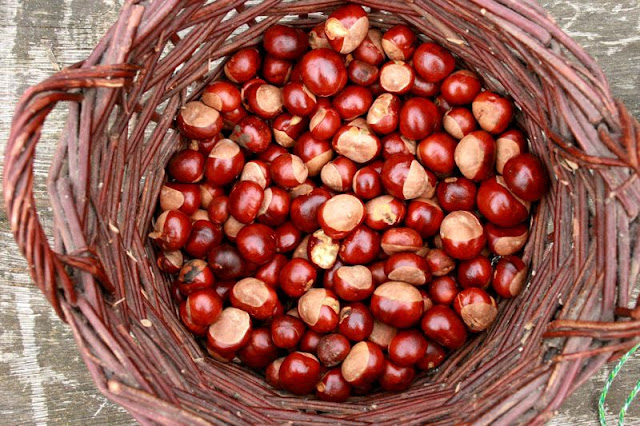 When you get home, the first thing to do is to bore a hole through the fresh chestnut or conker. Please make sure an adult does this bit! It needs to be a fresh one as a seasoned one would be very difficult. 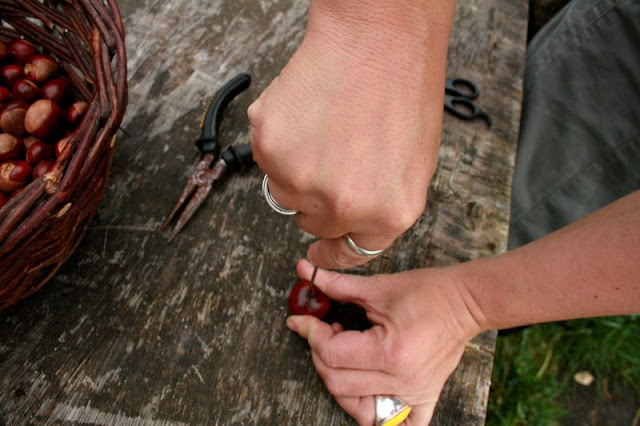 Then if you have an old shoe-lace, or if not, a piece of string, about half a metre long, on a darning needle, you can thread it through. Again, best if an adult does this bit. 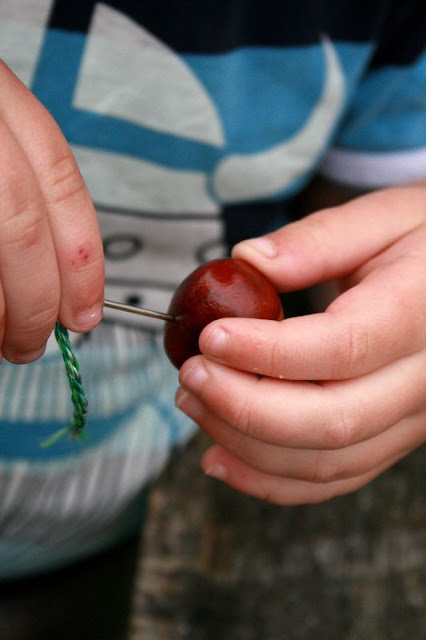 Tie a knot at one end and wrap about half of the string around your hand, with the conker hanging at the end. 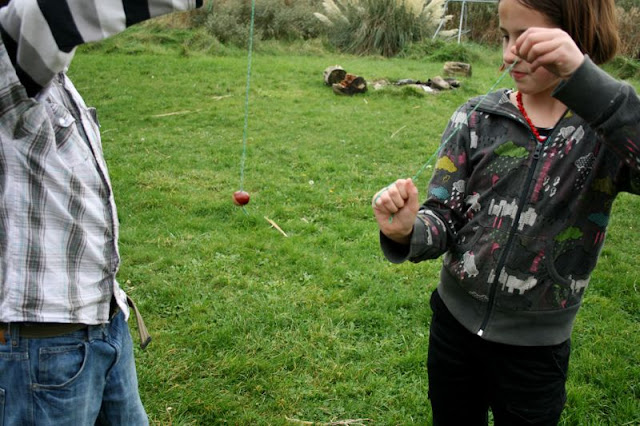 The idea of the game is to smash as many conkers as possible. Your opponent holds out his piece of string on which he has his conker. To get a good hard hit, hold the string in your strong hand and pull it out tight, holding the conker between two fingers. Take aim, then take a shot at hitting it off your opponents conker. 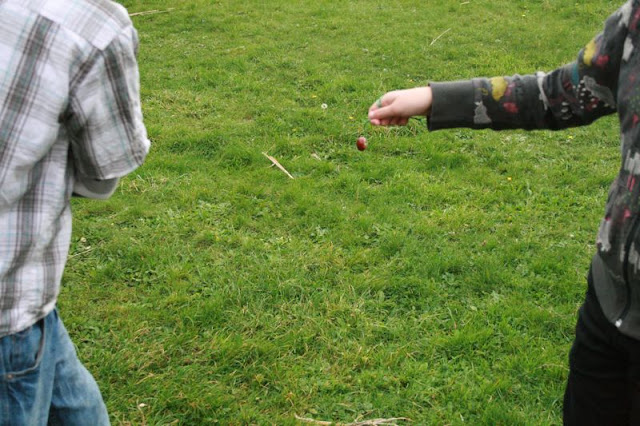 You can take turns, or allow three tries each before swapping over, playing until one of them is smashed or disintegrates. If you manage to smash his with your own then your chestnut is called a conker (conqueror). Although over the years, all chestnuts have become known as conkers! 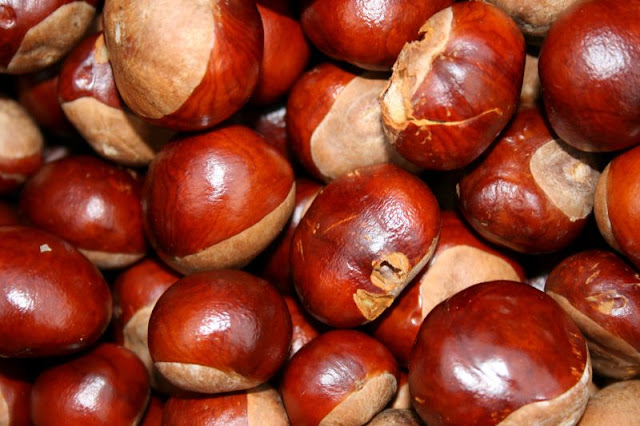 Traditionally, there were little rhymes you would say, for example, if you want to get the first hit when you see your friend with his conker you would say,

You would also give your winning conker a name which depended on how many other conkers it had destroyed. For example a 'Twoer', or a 'Fiver' adding them up as you beat each one. And a real winner would often be held over until the following year, when it was well seasoned and would beat all, hands down! 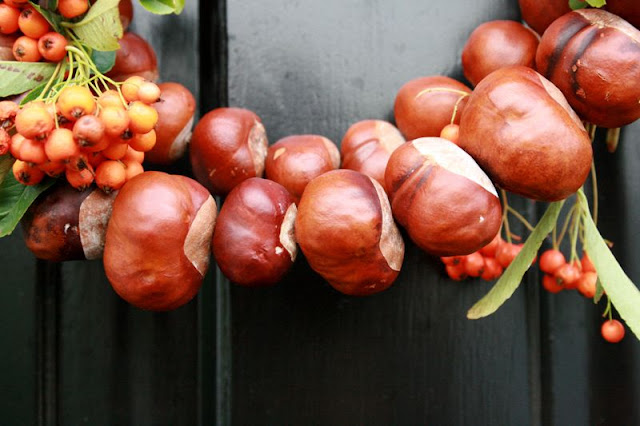 But best of all, conkers make the most lovely of Autumn wreaths!
Posted by Ciara Brehony at 18:43

Oh I love this post Ciara. I had never heard of Conkers before, but it sounds like so much fun, from the gathering to the playing. And what a lovely wreath. :)

What a fun game - we never played conkers - and we didn't have a Chestnut tree handy - mostly we played tag and hiding seek with our cousins who lived close by - I think we were still playing hide and seek when we turned teenaged - one of our most favorite games was to brace ourselves in a horse watering trough and get rolled down the sledding hill - sounds dangerous - but I don't think any of us ever got hurt doing it - such dizzy fun - thanks for bringing up the memories...

Oooh, we went conker hunting a few weeks ago as we do every year but I haven't introduced my kids to conkering as yet (no one else has either!). What we do with them is cook them (so they don't go mouldy) and our farm mad 8 year old uses them as pretend silage, bales, food etc. They are spread around the whole floor as silage or dung and then picked up again! and more than the occasional one ends up in the hoover!
Lovely pics as always Ciara :-)

This was second only to bows and arrows during the tv-less childhoods of the 70s. I was the proud owner of a whole bag of marbles so got to swop them for conkers.

And I was reading lately about the German 'forest kindergartens' - creches that are outdoors except in the most extreme of weather conditions. What a grand way to grow up.

Let's have more of these posts, Ciara!

Ah conkers, ah memories.
Of playing conkers, of brothers displaying their champion ones.

And then, years later, of going to the park with my own boy in that hour "between school collections", to get conkers.
Don't know if we ever showed him how to play with them, but sure had fun collecting them and squishing leaves too!

This was a real treat! I don't think I've ever lived anywhere that had horse chestnuts, but we have pecan trees aplenty, so maybe we could use those. The little ditties are the best!

awesome! what a great post, Ciara. thank you for sharing this. now i can't wait for next fall and a good game of conkers ;)

Oh my goodness! What wonderful photos and what a beautiful craft! Wishing you many happy times together!

Yay for conkering! I might go this weekend. No kids to enjoy it with though :(

I've heard/read of conkers but never knew what they were. They've been in books from the UK so I figured it was something unique to that part of the world or something that's gotten lost in the translation, such as 'boot' for car 'trunk' and that sort of thing. Oh, I could write VOLUMES on small town childhood of the 50s and early 60s!!! Maybe someday I will, when I'm not so hedged in by time. LOVED this, Ciara!

My girlfriend and I were walking the dogs recently. She spied some round things under a tree a declared that they were "conkers." Now I get it. (She's from Athy. I'm from Seattle. we apparently speak two different languages, despite the fact that we both call it English.)

I never heard of this game...looks like there would be lot's of giggling and sqeals going on. One game we used to play as kids was marbles. There were many different types of mazes and challenges and kids would line up against the brick walls of schoolyards in the spring. Each one would have their version of a way to win the most marbles. One in particular was a board which had nails in it and rubber bands wrapped around the nails to make a passage in which your marbles had to travel without falling out or getting stuck. I don't even know if kids play with them anymore. Love this blog idea!

When I was a child all the children in the neighbourhood spent hours collecting horse chestnuts from under a tree on our street. We tried making things with them without much success, but it sure was fun trying. There was something so warming about the smooth brown nut hidden, but easy to remove from, the spiky husk. I had never heard of 'conkers' before but now I think we should try that game!
I love the idea of the blog about having a childhood connected with nature - so very important in this age. Sigh...

Sadhbh @ Where Wishes Come From said...

Ah, many a bruised knuckle I sported in my early years as a result of this game! There were always little boys in the park beside our house throwing sticks up into the trees to knock down the freshest conkers. I must take a stroll and see if it's still going on. I never knew where the name 'conker' came from - it makes perfect sense now! Lovely memories. When our tiny girls are bigger we'll teach them how to play it. But I really want to try the wreath now, what a lovely idea!

i think i would be giggling uncontrollably trying to say this as a child ... and would probably end up in fits of laughter and peeing my pants! (did i just say that?)

as a child, we often played a game called 'kick the can'.

whoever was 'it' ~ the 'seeker' would stand close by an empty tin can set upright on the ground at a spot deemed 'home'. 'it' would cover their eyes and count to ten.

a person in the group of 'hiders' would appoint a 'kicker' who, while 'it' was counting would run up and kick the can as hard as they could. the 'hiders' would scatter and hide. when 'it' was done counting, he or she would have to go collect the can and set it back upright at 'home'. then 'it' would have to seek out the hiders. once spotted, 'it' would run back to the tin and declare which hider had been found.

if a hider manages to outwit 'it' forcing 'it' to get too far away from the tin at 'home', he can try outrunning 'it' ... 'kick the can' and free all the caught hiders so they can go hide again! phew!

and we usually always played in the dark : )

love this, ciara!
thanks for introducing me to conkers and stirring up some wonderful memories!

Funny how it never occurred to me as a child that some people might never have heard of conkers!

Lorna I don't think anyone teaches these games to their kids anymore do they? Love the sound of silage conkers tho!
Mise, Mimi, Sadhbh, here's to conkering memories!

And to all of you who mentioned childhood games, I do love the universality of things like marbles and kick-the-can! Thank you!

Do we teach these to our children? Not enough. I don't anyway. And this blog was a way to encourage ourselves to remember to.

Kris, I can just about manage five blogs! So I guess a good compromise is to combine it here!

What fun ditties and game! I am fortunate to grow up with a balance between a natural play setting and memorable 80s toys. I want my kids to play with dirt and mud, sticks and stones... No video games or Bratz dolls!