There and Back Again. 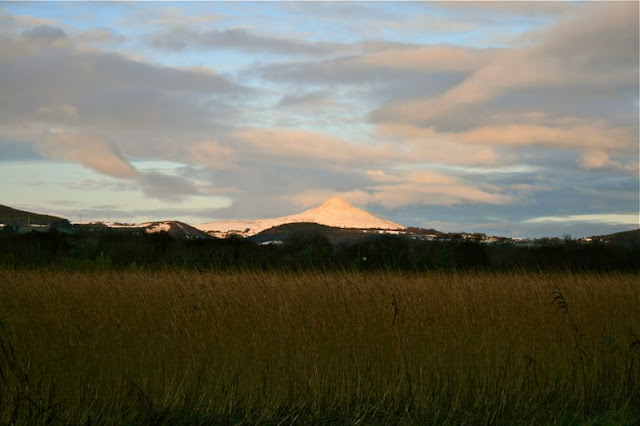 I didn't fall off the edge of the world after all. It seems this past week has been a wondrous thing, of snow and ice, of flying away, of quiet and a strange sort of marvelous space in my head, of things foreign and fascinating, of being cut of from the world.

And oh! But just imagine what that space was filled with! 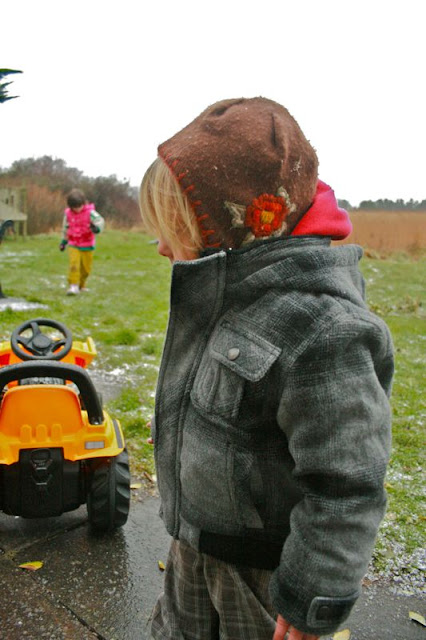 In the end it was just perfect that the children were snowed in in my parents. Because as you can see our beach~side garden doesn't hold snow very well, and they got more than they could ever have dreamed of with their grandparents. 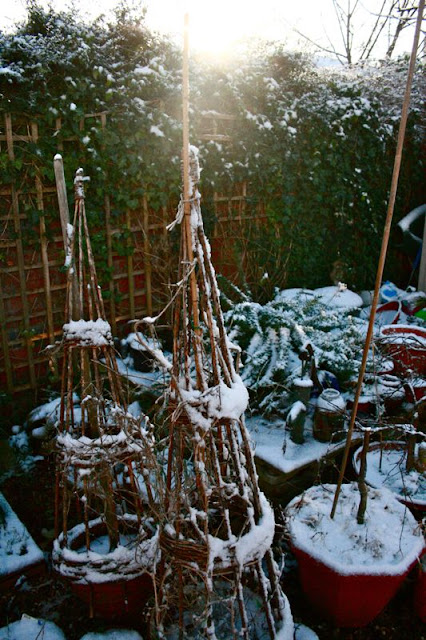 As we waved goodbye, we almost began to feel the elements were against us. Would we make it? Would the plane fly?
But it did, and we did, and so began our child~free adventure... 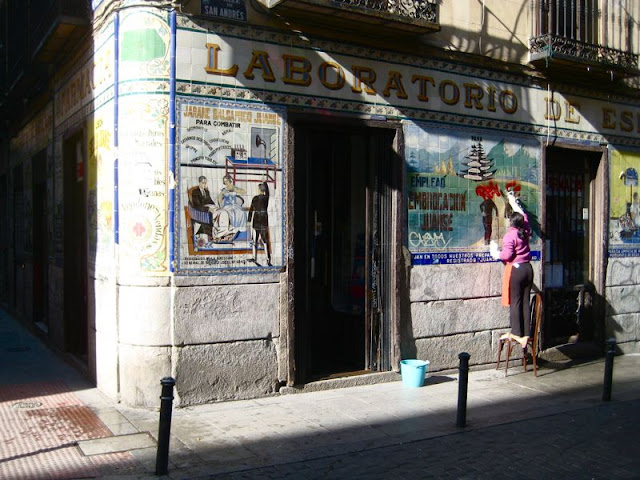 And though the sun did shine, it was cold, as we knew it would be. But a crisp, dry, blue~sky cold, so unlike a damp Irish winter. And we walked and walked the streets of Madrid, so glad to have our dear friends Marta and Sam to guide and translate for us! 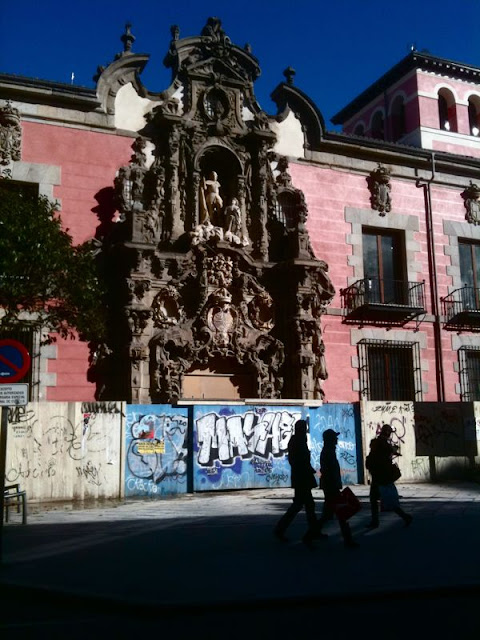 Jay got his fix of art in the Prado, while myself and Marta went shopping, and the pair of us talked our way around Madrid! It was so good to have time together to talk and just hang out.

On Sunday we all went to the Sofia Reina and saw among other things, Guernica. (No photos allowed!). It was fascinating to see it, but even more so, for me, I found myself looking at the faces of the people who were viewing at it. Most of them were just in awe. Absolute awe. And none more than Jay. And although I was curious at my own seeming lack of interest in the painting itself, to the point of not really looking at it, when I entered a nearby room that was filled with studies for the bereaved mother's face, I could not contain my emotion. It was too much and I had to leave.

And I realised that being there in that room with something so powerful was just too much for me to take in. It was like being in the presence of pain, and horror, and great evil. Not the painting itself, of course, but what it represented. And following on from this, an exhibition of war~time photos...even now as I write I have a pain in my chest. 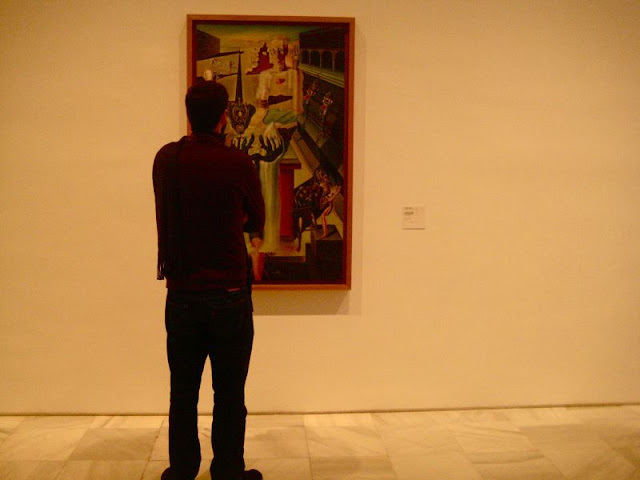 But our time in Madrid, like this, together, was something special for so many reasons. The photo above is so nostalgic for me. I have many, many images like this of other galleries we have wandered in all over the world in the last (almost) twenty years. And that pose is so very familiar it kind of breaks my heart. 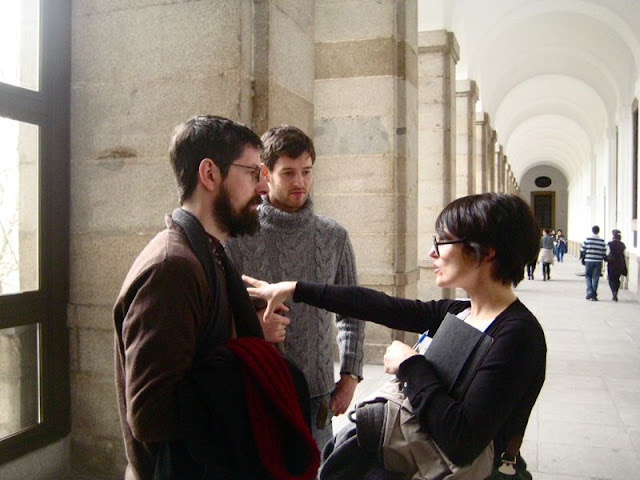 And so we talked and talked, 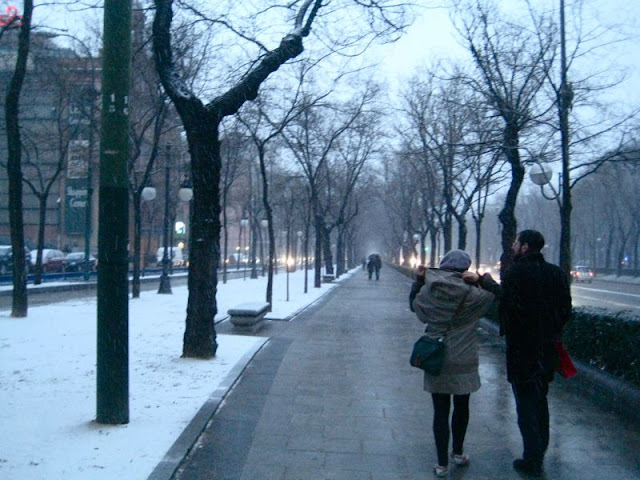 And walked and walked, like I haven't in years, 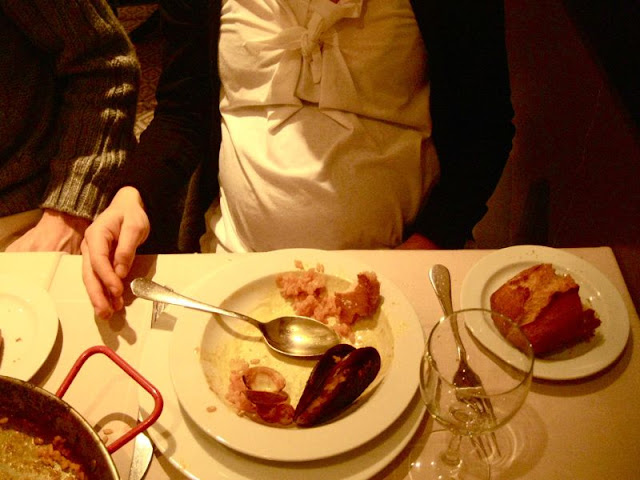 
And ate, and ate, if the truth be told! 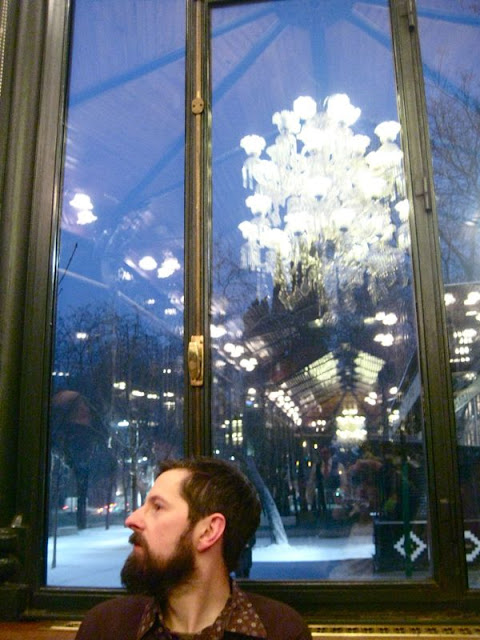 And the snow followed us there, creating a magical, beautiful, wonderful long weekend, which would not have been possible without our fantastic dear, old friends, and also, without my dear old parents! I hope you've all recovered! 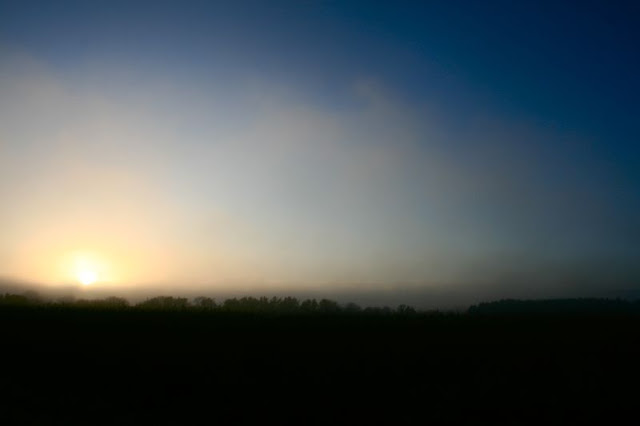 And so, eventually we wound our way home, back through the ice and snow to the beginnings of the Thaw.

And the little, and not~so~little, clamoring voices I welcomed with open arms. I do need a little chaos in my life after all!

beautiful, Ciara. so thrilling to hear of your latest adventure. i want to say, even for how briefly i've "known" you, you were missed. and i'm so happy you are back and that Milkmoon has risen again and is shining down upon us all with its wonder so we can all share in it. glad you're safe home.

In the end, there is no place like home.

Love the photos. Glad you had a fun getaway!

Your photos make it all look so calm and wonderful. I am so glad you got to have a holiday!

Thank you for the beautiful pictures!

it sounds so amazing! madrid is a great city for walking...and talking...and yes, of course eating!!

A wonderful account of your trip and a strong statement about family and friendship. Good to hear you had a safe journey.

Great photos from home and abroad.

The word verification is 'verboolo'. I thinks that's a great word for chatting with your friends in Madrid.

That is so beautiful you got a little get away. Sounds like a great time. And it is always great to be back home.

what an adventure! I love the walking and walking photo.

Oh such very beautiful photos. I would LOVE to go to Europe someday. Thanks for posting! Sincerely, Susan from writingstraightfromtheheart.blogspot.com

Your photos brought back memories of our trip to Madrid 8 years ago...you are indeed fortunate to have friends there and to be so close to all of Europe! It takes us just as long to fly across Canada as it would to fly to Spain! Cheers...

Art and shopping and talking and eating and walking: a perfect long weekend mix, much enhanced by being in Madrid. It feels, odd, doesn't it, to be occasionally responsible for no one and nothing with any degree of immediacy. Glad you had such a great time!

This sounds like heaven.
Thanks for sharing your feelings about the paintings; it was very moving. I would love to see them one day.

So glad you haven't fallen off the end of the world. I love to come by here for a bit of peace.

sounds like you had a lovely time! bet your still glad to be back to the nest and chicks though! ...and i notice you now have 1000 followers - momentous! s x

I love the way you combine words and images to create such a warm and peaceful presentation of the world around you. It looks and sounds like a wonderful holiday.

Lovely post. I also like going to galleries, for the art but also to watch other people and try to imagine what's going on in their minds as they look at the art.

Cherished chaotic clamouring children after the magical meandering of Madrid. How beautiful.

Welcome back!It seems you had a lovely time. The photos are great
x

thank you Ciara for sharing your adventure with us. I could almost feel your pain too as you described your time alone with the study of the mother's face.

One of these days, in the not too distant future, you will be sitting in your kitchen looking out your window daydreaming of another world and memories of this little break will fly into your head like wisps in the wind.....Happy holiday snapshots that will float you merrily along to the next holiday....Good to have you back sharing with us!!!!

....everything worked out beautifully ...
i'd say that really charged your batteries too ..

What a wonderful trip and such beautiful photos and memories! When I read your post about the art you saw I couldn't help but think of Stendhal Syndrome (google it and read) -- I think you'd find it interesting.

So sweet, the gallery photo, so touching :)

Amazing photos, Ciara! What a beautiful city. And you captured it beautifully. It looks like you a had a great time.