So it's a while since I mentioned my brother Chris and I thought I would tonight seeing as he has updated his fab website. Do go and check it out. His work is brilliant, and clever and often hilarious. It's a breath of fresh air, truly. 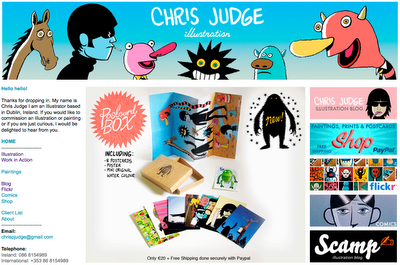 There's paintings to buy, as well as postcard sets. There's free comics to download, including Dystopia which is written by our older brother Andrew, and illustrated by Chris, and was originally published monthly in Totally Dublin magazine. (And okay, maybe Dystopia doesn't fit under the banner of cheerful... however...)
It's still a work in progress with the shop not fully up and running yet, but you can see examples of what's in store over on his Flickr. 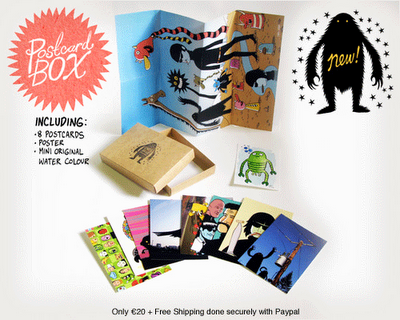 There's also a ton of other stuff to see over on his blog too. And do have a look at his Work in Action. This guy is all over Dublin!  If you are in our neck of the woods then you've probably even seen his work and not known it. The kids get such a kick out of spying a Chris bus or ad somewhere unexpectedly.
Well done Chris, it looks fantastic!

How completely wonderful! Love it!

What great fun! I took a peek, and I like his blog, too! And the Work in Action... wow. I think I'm living in the wrong place... Our transport vehicles look like something out of the X-files FBI... Completely NONDESCRIPT.

Thanks for the cheer.

Wow, I love it. I have bookmarked it so I can return and look even closer. Thank you for sharing.

I love his stuff. So cheerful. Like looking into the mind of someone who took all the best of childhood with them. Funny and quirky and sometimes slightly scary!