I'd like to share with you something that Jay is doing. It's the work he does instead of painting for endless hours in his studio, the work that pays the bills, the work that meant we could have one more baby. And even though I know he would rather be in his studio, I also know he loves doing this too.

In 1987 himself and his friend John won a competition to paint a 80 metre long mural in the DART (train) station in Bray. It's still there, just about, and has become something of a landmark. Being beside the sea though is not very paint friendly, so they recently came up with a plan to render it in mosaic. After a year of planning and fundraising, they finally got a start on it and the first panel went up last month. And I finally got to see it yesterday when we got the DART to Bray for the festival. 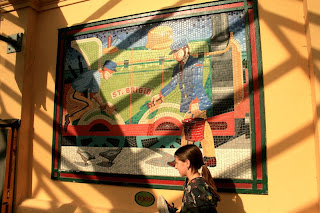 This is one of the painted ones waiting to be mosaiced. (Is that a word?) 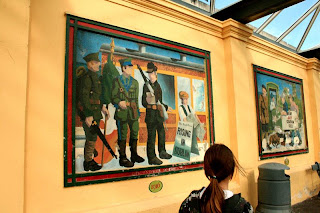 They're doing a blog about the whole project, which you can see here, as well as better photographs, and there is also a documentary being made about it!

I am so proud to see this coming together for them after all the hard work, and I can't wait to see it finished!

Edit: You can also see some work-in-progress photos of this project, as well as other work they do over here.
Posted by Ciara Brehony at 18:41

Email ThisBlogThis!Share to TwitterShare to FacebookShare to Pinterest
Labels: my man

Ru, Fin and I saw the 1900 mosaic as we 'Darted' through Bray to Greystones on Friday. It looks superb. Look forward to seeing the rest of the restoration.
Time for a new verb to convey the transformation of paint into mosaic? 'Triskilled'?

Your whole family should be proud! I wish I could see it up close....

This is AMAZING! I'm checking the blog to learn more about it.
You are all so talented people!!

Wow, how very interesting... what wonderful work Jay does :)