Many years ago, one blustery, wet autumn day much like today, I found myself surrounded by bags of apples from friends gardens, which, naturally, led to a hankering for apple cake. I was disappointed to discover I had no eggs, and really did not feel like getting in my car, (I think there may have been pyjamas involved), and for the first time I considered how reliant I was on eggs for baking. After rummaging through my various cookery books, I eventually stumbled upon a recipe that did not need any eggs, that was filled with stewed apple, spices, and lots of raisins and sultanas. It was in one of those anonymous baking books you pick up in the supermarket for a few quid, that turns out to be brilliant, and one that is reached for again and again over the years.

These days I find myself with my own (rather large, and very old) apple tree, and an increasing interest in baking without eggs. The other day, with my dearest sister and her family home from Mexico for a family wedding, I found myself with an excuse to do some baking, (does one actually need an excuse to bake?) and this was the first recipe that came to mind. This is a cake that really only ever gets made this time of year, (I do have a thing for seasonal food), and the last few autumns I have been making it for the family, unable to eat it myself, but this year I was inspired to experiment and see if I could tweak the recipe so I could. Obviously it had to be edible for everyone else, though it's rare they ever turn their nose up at anything sweet I make. Dessert is dessert, after all!
So, here it is, reinvented so that it is both gluten and sugar free, and vegan friendly. And I can tell you it has lost nothing on flavour and deliciousness, and the bonus is that the house smells divine as it bakes, a yummy, spicy wafting that draws people into the kitchen looking to see what's cooking. It's dense and moist, with the nuts adding just the right amount of bite to it.
You'll notice I use eating apples. As there is no sugar in this recipe, using eating apples means it's sweet enough without it. I served it with a choice of Alpro vanilla custard, or natural yogurt, for those who preferred. And if you can manage to save some, it is even nicer the following day.

1. Put the apples and the water in a saucepan and bring to the boil. Simmer for about 20 minutes, or until soft, stirring occasionally. Eating apples might take less time than cooking ones. I also found my ones didn't break down into pulp, the way cookers do, though that just might be our variety. Leave to cool.
At this stage you may want to thoroughly butter and line your tin. I used a 9in round tin this time, though a similar sized tube tin works really well too.

2. Sift the flour, bicarb of soda, and the spices into a bowl, making sure to toss in whatever is left in the sieve if using a more 'wholegrain' flour. Remove about 2tbs of this mixture and, in another bowl, toss it with the raisins, sultanas and nuts.

3. Cream the 'butter' and the agave syrup well together. Fold in the apple mixture. Then fold the flour mixture into this. Stir in the vanilla, and then add the fruit and nuts mixture. Pour into your tin, and bake until a skewer comes out clean, although this is tricky to tell as there is so much yummy apple in there.
Roughly about an hour and a half, though it's a fairly low oven so it might take longer or shorter, depending on your oven.
When it's done, cool it completely in the tin before turning it out. 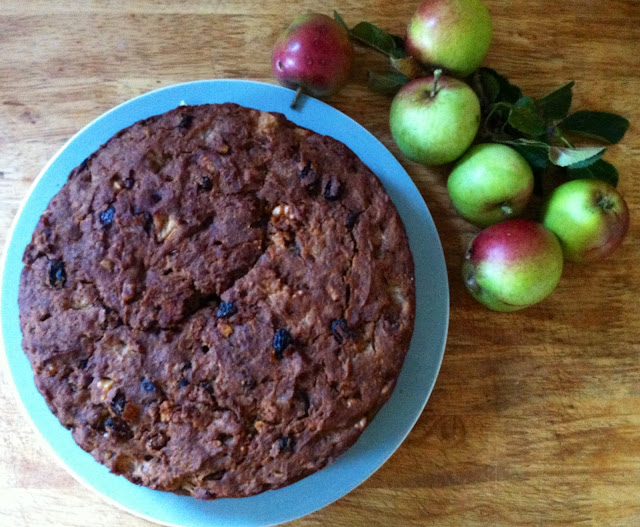 The original recipe, for those who can, just use whatever flour, plain or wholewheat, you usually use, and dairy butter.
For those who can eat sugar, you can replace the agave syrup with about 400g sugar, though a good bit less if still using eating apples. If using cookers, add a tbsp of the sugar to them when stewing them. The original recipe also had a lovely icing on it, that I have yet to figure out how to replace. Visually it misses it, but taste wise, it does just lovely without it. 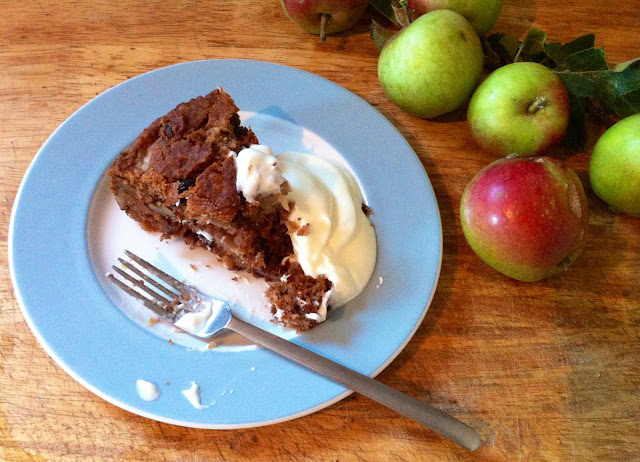 4. Put the sugar in a bowl, add the vanilla, then slowly add the milk, mixing it in thoroughly, until it is smooth and has a thick, pouring consistency. Transfer the cake to a serving plate, and drizzle the icing on top. If you like, you can sprinkle it with some chopped nuts. Allow the icing to set before serving.

In The Midst Of Autumn, Suddenly.

What is it about this time of year?
When the green has grown tired, and the wind is taking it's toll
leaves blown about the garden
sheets snapping on the line
and in the morning there are apples on the ground 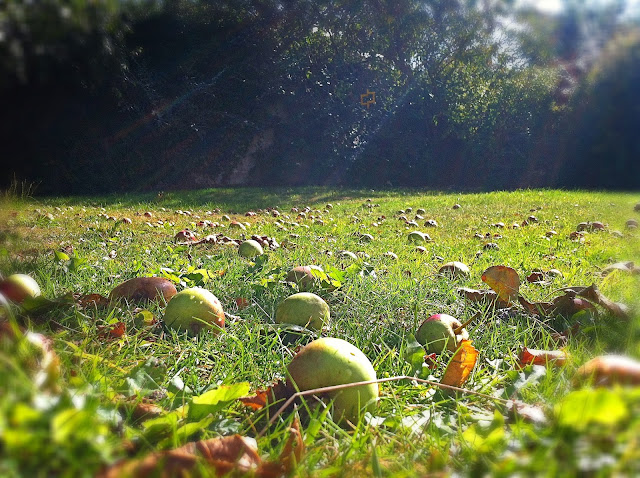 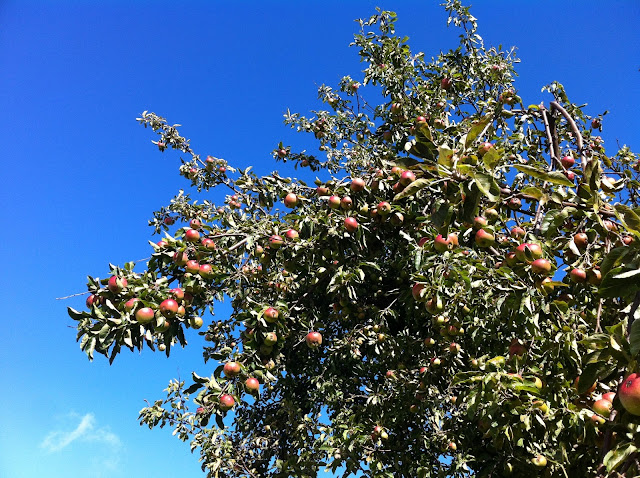 I am lured by the sea, still,
though not so eager to go in
drawn instead to it's hunger
a deepening boom that resounds from it's depths
it's summer humour gone now 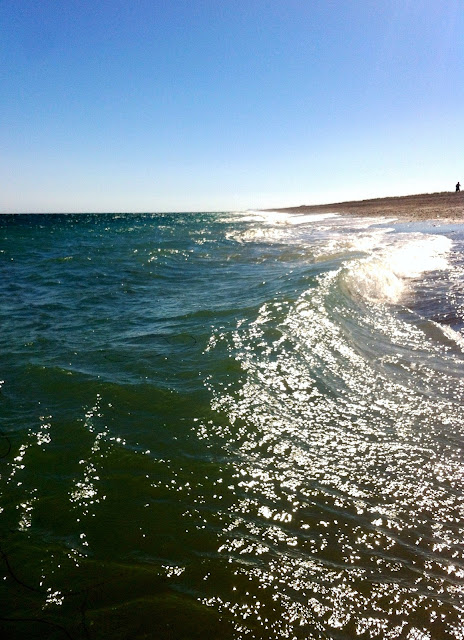 And I will wait
for the darkening days to draw in
to wrap themselves around us
pulling into the dark days and nights
when we move indoors
when time becomes our own again
the wild outside to be first considered carefully
the carefree, go-in-what-you-have-on-you days put to bed for another year 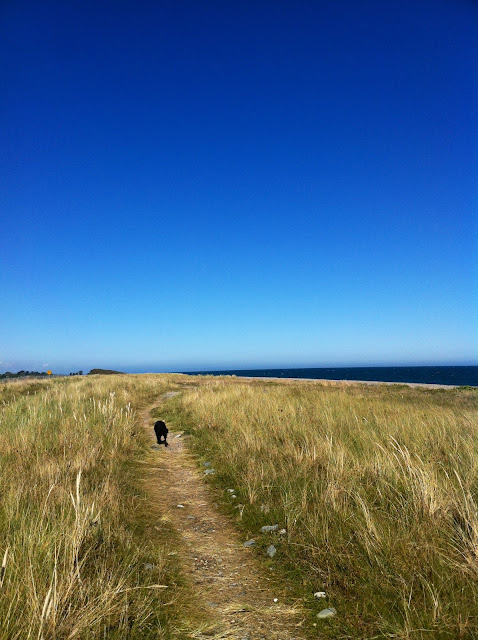 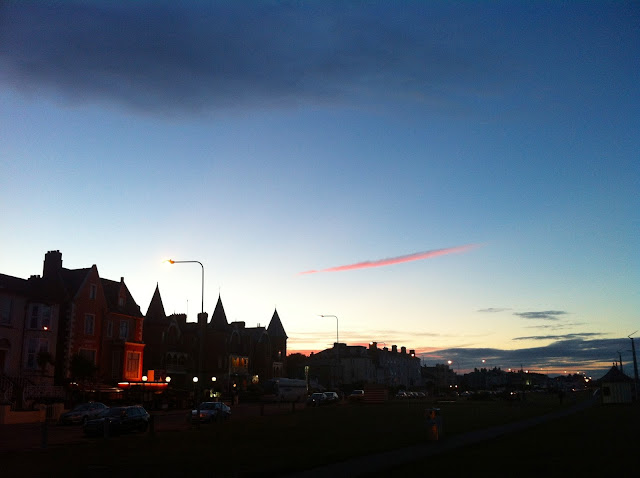 In the quiet we will embrace the calm
while outside winter heaves itself about
breathlessly trying to catch itself
and my pen will scratch, my needle stitch
my eyes always on the sky and the sea
waiting.

Recipe for Autumn Spiced Apple Cake over in my kitchen, here.